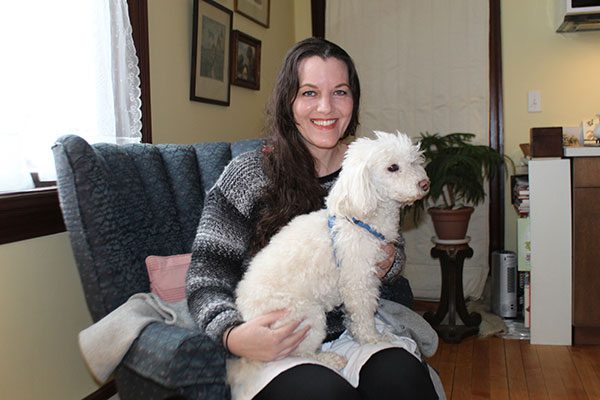 How does a girl from Lewiston get sexually trafficked?

And then become a leader in the recovery movement?

Tricia Grant grew up exposed to alcohol, drugs, and sexual abuse and, by the time she was 12, she was struggling with housing stability. At 14, she was pregnant. At 15, she was a mother and a part-time high school student, scrambling between her job at McDonald’s and babysitting, desperate to pay bills.

“Just hearing what my community was saying about me made me the most vulnerable,” she says. “I heard comments like, ‘There are my tax dollars going to waste.’ So I stopped receiving all assistance.”

One day at work, Grant was talking with a friend about the struggle to earn enough money and how afraid she was that if she didn’t “do everything perfectly” that her son would be taken away. Two men overheard and invited the girls to come to an apartment the next evening to hear about a way they might be able to earn some money.

”I don’t think we even thought about what it was,” Grant says. “We went up there and they raped us. They gave me a pager and told me, ‘When this pager goes off you better show up there we tell you to show up, or we’ll have your son taken away from you.’ They knew that was my biggest fear, and they exploited that.”

As ordered, Grant showed up when the pager went off, or someone would pick her up and bring her to a strip club, a hotel room, or a party.

“I tried to stay in school, because it was my only safe normal place,” Grant says. “People saw the good things I was doing being a mom. They recognized that I was a very good student and was smart and they encouraged me in that way. Then school ended in June, and by the time September rolled around, I was too broken to go back.”

Grant never again saw that friend who walked into the sex trafficking trap with her; she’s still missing.

“That’s the reality of this,” Grant says. “People go missing all the time, if we don’t help.”

There were other girls—and they never knew where they were going, how long they’d be gone, or what would be expected of them.

And then one day Grant was at a fundraiser where a presenter spoke about sex trafficking—and, for the first time, Grant knew that none of it had been her fault.

“That really rocked me and broke me,” she says. “I had a teaching job that I’d been at for 11 years that I lost because I couldn’t keep it together.”

Putting a name on her nightmare and letting those memories rush back in was a bit like re-breaking a bone so that it could set properly. She took a summer to regroup with her kids and heal emotionally, then took substitute teaching and catering jobs—gigs with the flexibility to put her emotional health first.“Once Homeland Security cleared me, I was able to share my story for the first time,” Grant says, explaining that there are details that she can’t share because they could jeopardize an open investigation. “I got involved with organizations that would hire me to share my story with law enforcement or do independent consulting.”

Over the past seven years, Grant has partnered with Courage Lives in Northern Maine and helped start a safe house in Androscoggin County. Now, as program director at Sophia’s House, she’s following a calling to “help others become survivors and then thrivers.”

She says, “Witnessing the brokenness in humanity, I talk to God a lot. It took a while to really let myself let go and let God.”

find out more at Sophia’s House

Amy Paradysz writes for Journey, Maine Women Magazine, Green & Healthy Maine Homes and the Portland Press Herald. She has been a writer and editor for more than 20 years. She lives in Scarborough.
← previous next →